In Solar Energy at Home

Being born and brought up in a developing country means there is always a deficit of resources. Inflation is always on the rise in this part of the world, which means the prices of commodities are high.

In my early stages of life, I quickly realized that the best way is to be self-sufficient and self-sustained. But if you live in a city like me then due to lack of space, growing your own food might be difficult but electricity can be harnessed at home. And the Sun even though millions of kilometers away has the solution.

Solar Energy: You have the Power!

Yes, you will have the power of the SUN. A giant ball of gas burning out in space for billions of years (4.603 billion years to be exact). It is an abundant, free, and renewable source of energy waiting for you to convert those photons into electrons. There are multiple ways in which you can harness the Sun’s energy, not only for electricity but also for heat. The positive thing about solar energy is that it is cheaper compared to other sources of power. Here is a chart which shows the trend over time of the gross price per watt from the year 2016 to 2019. 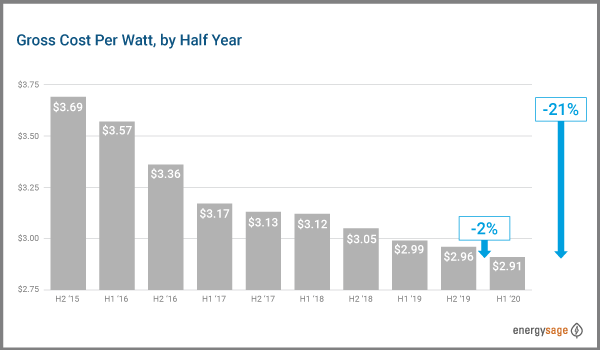 Here are 5 ways to Utilize Solar Energy at home

Solar panels are just like the leaves of a tree. Both generate energy using sunlight. Solar panels generate electricity by converting the photons into electrons in a Photovoltaic Cell (PV cells).

These PV cells are basically semiconductors made up of Silicon wired up to generate electricity. These panels are interconnected in an array to generate the amount of energy needed.

The government of India will even pay a 30% subsidy upon installation cost. There are two ways in which you can install a Solar system at your home in India: 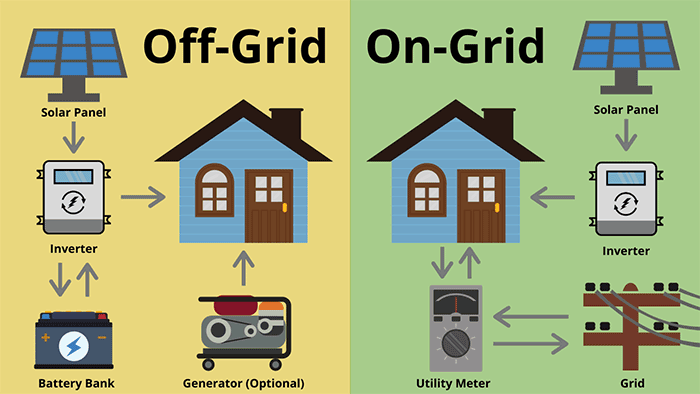 Here the Solar System is directly connected to the grid with help of an inverter and a net meter. This is a straight grid system where the electricity generated is directly sold to the utility department. In this case, the meter reading reverses, which means the distribution company will pay in terms of credits for selling the surplus electricity generated at your home. The only thing to keep in mind is that there should not be any power outage or else all the electricity produced will go to waste. The good news is that the Ministry of New and Renewable Energy does support this scheme.

If you want your house to be powered only through Solar energy and be independent of the grid then this is the choice for you. You can add in a large bank of batteries connected to the solar panels. You have to ensure that there is enough sunlight throughout the year and that the energy stored can fulfill your energy consumption. The only downside here is that you have to pay a high initial investment for installation which will prove to be less in the long run of total independence for the grid. Being energy efficient is the key here.

The more energy-efficient your home is the less you will consume from your batteries. You have to be extra cautious in using electrical appliances at your home, you can rather use the surrounding environment to our benefit to reduce the load on your batteries. This is also applicable to the first case. 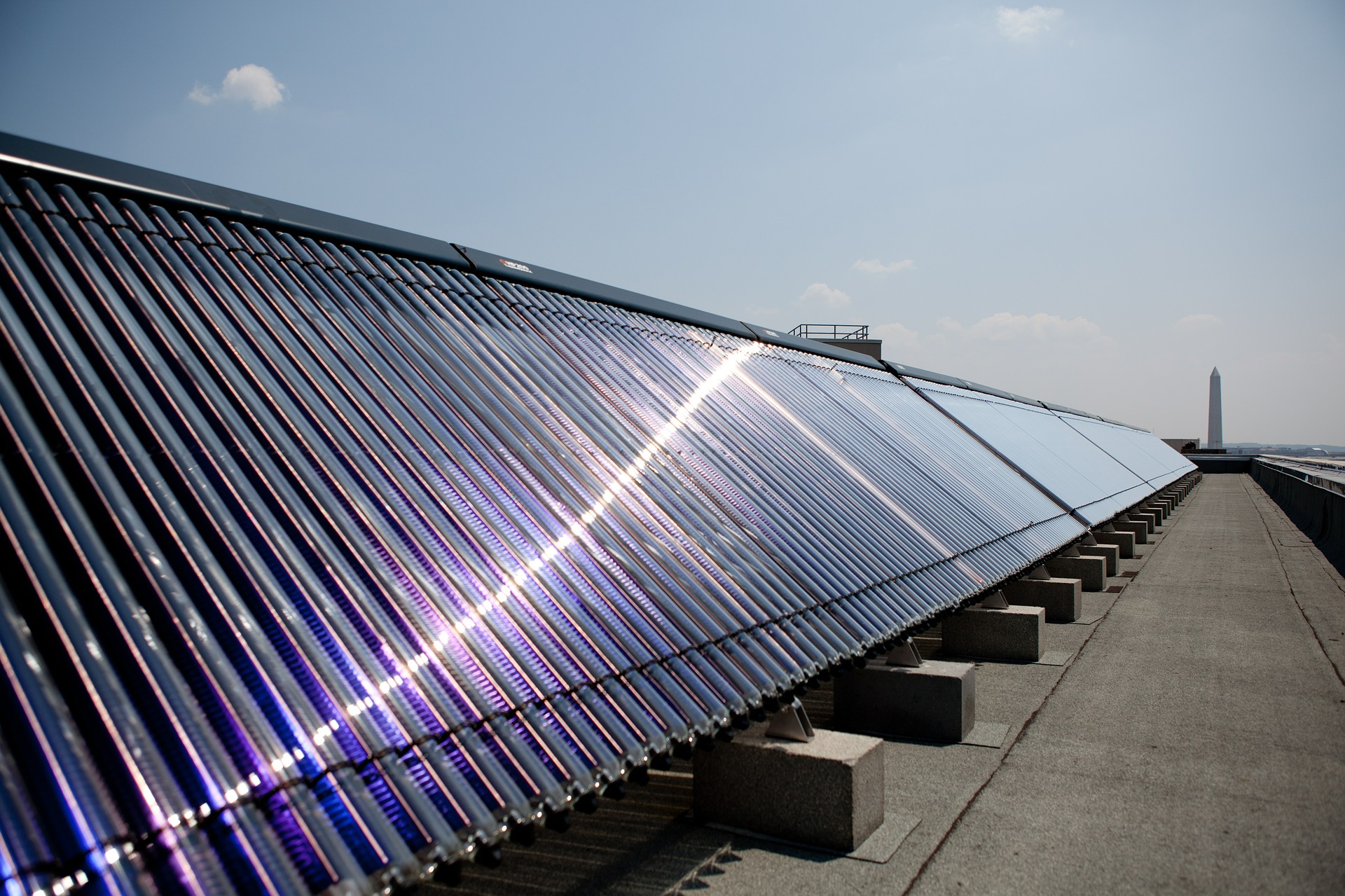 Conventional electric or gas-powered water heaters consume a lot of energy to heat water. Both conventional heaters have a source of energy that is either expensive or produces poisonous fumes. In the case of a Solar Water heater, it uses the cleanest, free and renewable source of energy which is sunlight. There are different types of heaters available in the market but all use the same basic principle and are very easy to install. These heaters act as a heat exchanger, the energy from the sunlight is directly transmitted to water. Geysers come at a wide range of prices but it doesn’t stop there. They add up a good amount of units into your monthly metering. Whereas Solar Water heaters are a one-time investment with zero electric consumption. It will directly cut off the expense generated by an electric geyser. 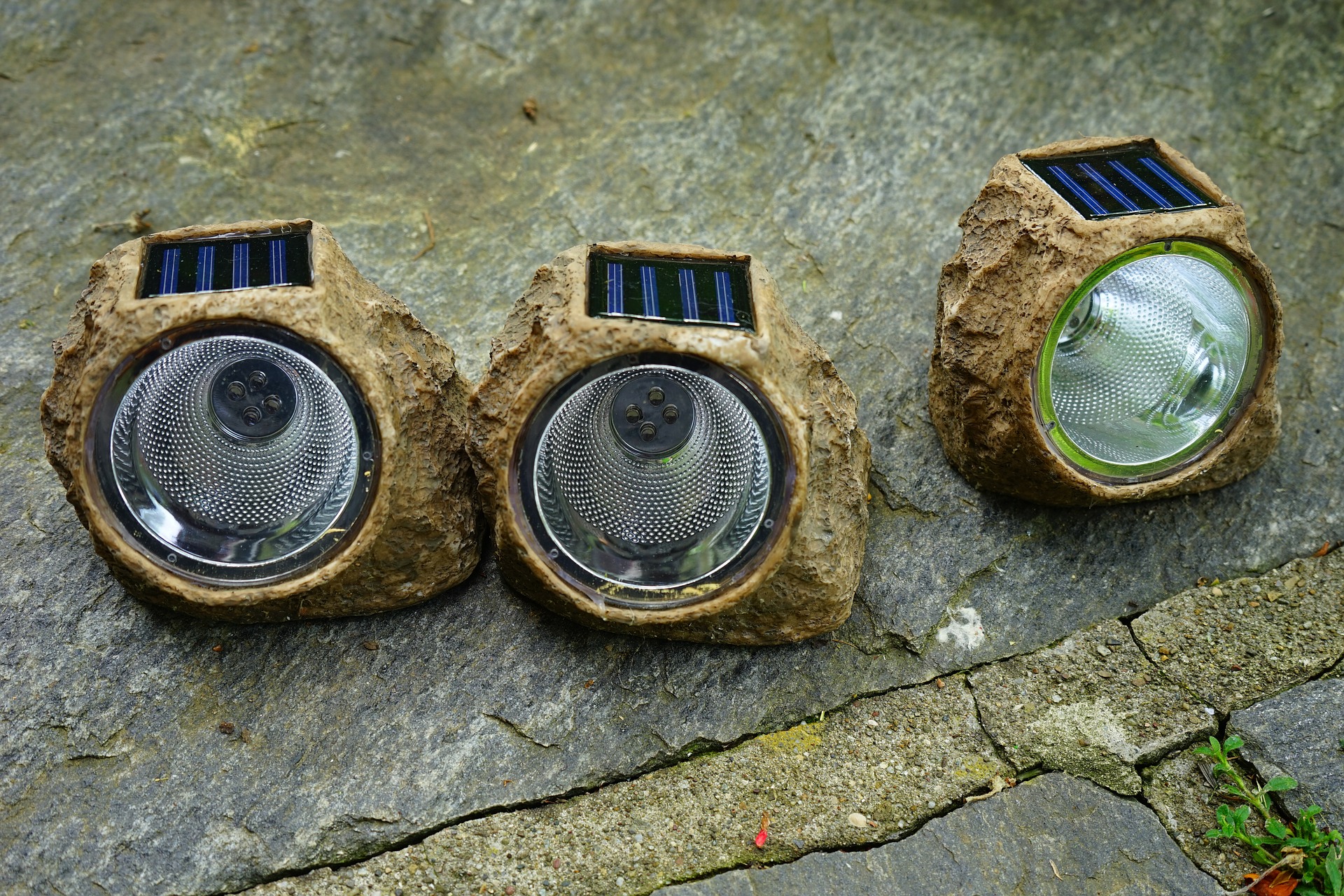 Solar lamps are the best solution for a developing country like India, where there are places with absolutely no electricity. It is mainly focused on the rural areas of India and it is a very cost-effective solution. A solar lamp comprises 3 components – A solar panel, battery, and a lamp.

There are two types of lamps, indoor and outdoor lamps. 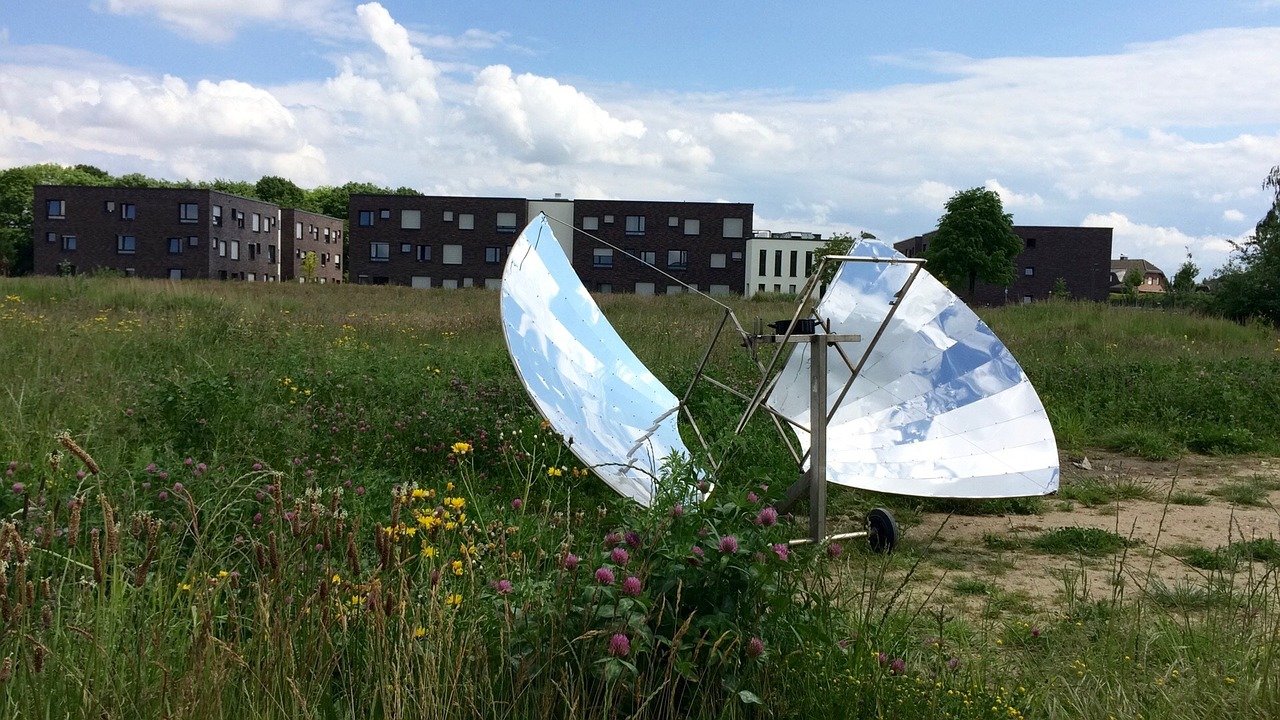 Solar cooking is a way of utilizing the sun’s rays and using the heat energy generated as fuel to cook food. These contain shiny reflective surfaces which converge and concentrate the sun rays to a particular point where the uncooked food is placed. The sunlight can be concentrated to produce extremely high temperatures, that can not only be used to boil an egg but also reach over a 1000 degree Celsius. In the case of a standard solar box cooker, it can reach up to 150 degrees Celsius which is not very hot.

It is totally self-sufficient and does not use any external source of fuel like propane, butane, wood, or coal. Thus reducing the amount of CO2 which is released in the air in extracting, logistics, and burning of other fuels. 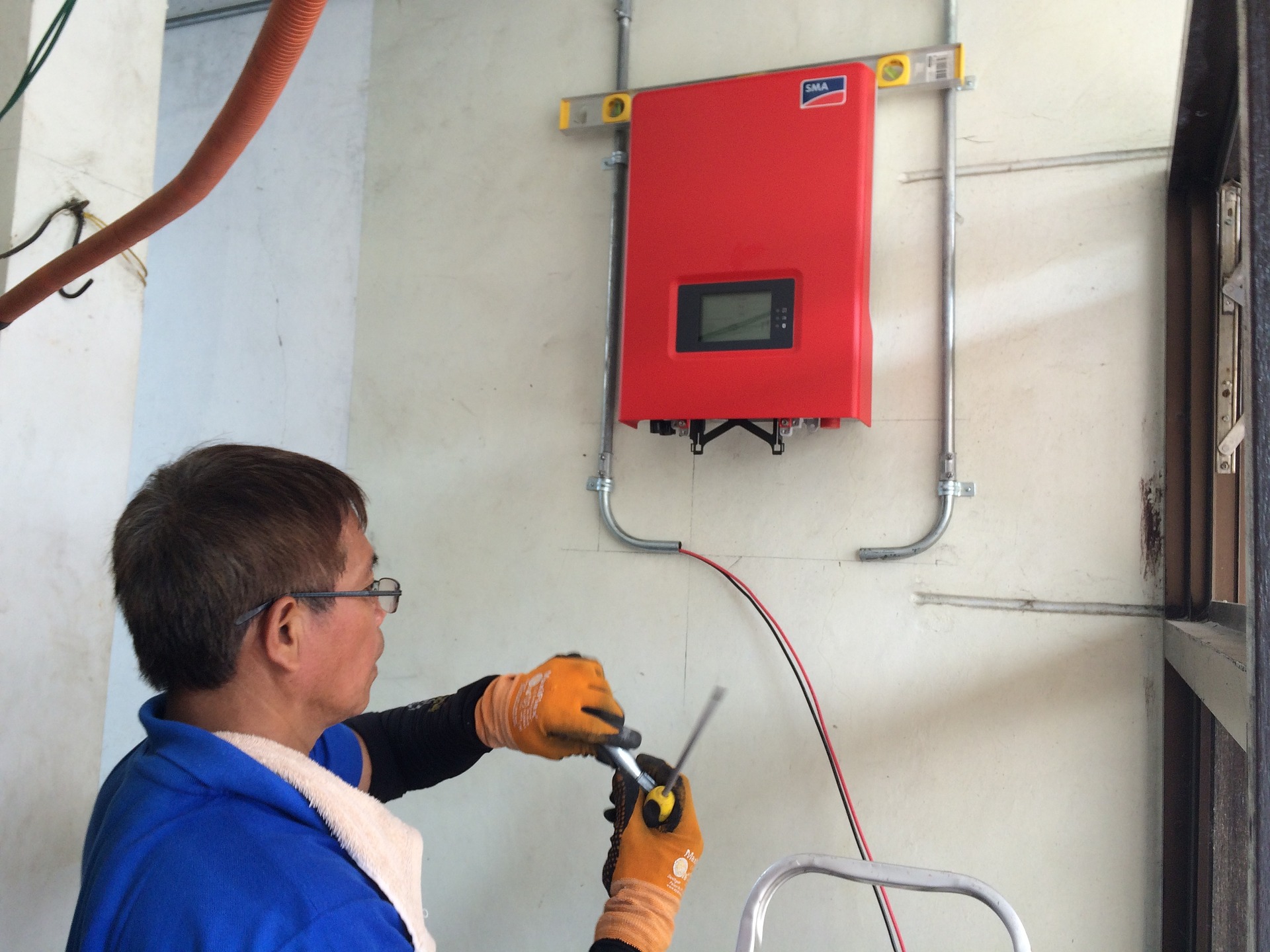 The function of a solar inverter basically converts the Direct Current (DC) produced by the solar panels to Alternating Current (AC) at 240 volts so that it can be used to power up household appliances. As electrical appliances cannot operate using DC electricity it has to be converted to AC. If a solar inverter is not used then the electricity generated is fed to the grid.

Solar energy can undoubtedly be a potential source of alternative energy which can serve a dual purpose. It can not only power up a house and help stay off the grid but most importantly helps in the reduction of carbon emissions. As the sun will still live another 7.5 billion years and that’s a lot of time, a lot!!